Australian Aboriginal paintings will always be considered as a brilliant type of modern art. It is an important section of the oldest cultural traditions in the world. The large choice of Aboriginal paintings comes with a glimpse of the exquisite work of art which may have a unique place in the field of art and culture.

Aboriginal people in Australia were working on unique pieces of fine art from a traditional time. Aboriginal art work is available in many forms and can be seen throughout the nation. The traditional engravings, bark paintings, rock art, figurines made from wood, sand painting and fibre craft are among the special kinds of Australian Aboriginal art. The Rock art which is often thought to be a specialized form of art also throws light on the concept concerning the existence of human life within Australia. One can possibly come across a wide selection of Rock art in Australia.

A number of tourists visit Australia to learn a lot more about the Native paintings and rock art. Some of the most well-known places to search for rock art in Australia are Murujuga, Panaramitee and The Sydney Rock Engravings. The Murujuga rock art is renowned for its collection of petroglyphs and also portrays images of animals that are now extinct. The Sydney Rock Art is better noted for its style and unique characteristics. Intricately carved animals, symbols as well as human images are the main features of Sydney Rock Art.

Aboriginal Australians used to tell their unique stories and helped others find out more about Dreamtime. The dreamtime stories helped the folks obtain a better idea of the various aspects of life and religious beliefs. They represent stories about food obtaining, marriage, rivalry, birth and even death. Storytelling was the conventional way pursued by the Australian Aboriginals to describe the glorious past, customs and laws.

These days, modern-day items are commonly used for the painting purposes. Nevertheless, it is true that the authentic symbols will be utilized to keep their ancient customs and traditions alive. Many experts have realized that the designs and signs used in contemporary art are very like the ones available on rocks and caverns. Dot paintings are an exceptional sort of Aboriginal paintings and so are well-accepted. In this type of art the canvas used for painting is noted with dots of paint which is often used to make patterns and designs.

Anyone who is familiar with the Dreamtime stories won’t find it difficult to understand the symbols. Unlike the traditional times, bright colors are now used often instead of the crushed seeds and ochre. It has been observed that the Aboriginal modern art has witnessed a fast growth in recent times.

In the modern times, modern-day materials are utilized to make paintings. However, the conventional symbols will always be used to keep their ancient culture alive. It has been found that the symbols featured in today’s modern art are more or less very similar to the ones available on caves and rocks.

Dot paintings are also an exclusive kind of Aboriginal painting and deserve a special mention. In this kind of painting the canvas is mostly covered with small dots of paint which can be used to create symbols and patterns. If you are acquainted with the Dreamtime stories then it won’t be hard for you to understand the symbols. Traditionally natural pigments like crushed seeds and ochre were used but currently bright colors are more widely used. Aboriginal contemporary art has shown an immediate growth since the early 1970s.

A local Aboriginal artist in Australia. For more information about Aboriginal paintings: 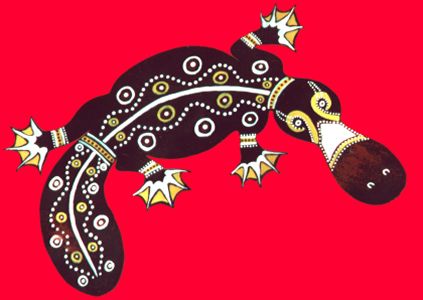