Aboriginal art, in particular the dot painting style, has become associated closely with Australian art world wide, and is a popular addition to Australian art galleries and many private collections.

Few may be aware however, of the deep sacred mysteries and spiritual meanings behind some of the symbols and dots depicted in each painting, or art work, by the Aboriginal artists themselves.

To gain an understanding of Australian Aboriginal art, it is essential to look deeper into the Aboriginal people’s strong connection and respect of the land, the animals, their elders and the spiritual side of their dreamtime beliefs.

The Aboriginal people themselves, did not relate to the stories as dreamtime stories, but rather, they were a way of explaining the creation of the world, how the animals came to have certain characteristics, and to pass on the Aboriginal lore (law) to the children.

To the Aboriginal people, these stories were a way of life, and were not necessarily considered as something special. They was simply the way that the traditions of their culture, was passed down throughout the generations.

Traditionally, Aboriginal people would decorate their bodies and shields using paint made from ochre, for their sacred ceremonies. They drew ceremonial signs and symbols in the sands as part of the ritual, to maintain their culture. Afterwards, these pictures, or images in the ground, would be smoothed over to hide their deep sacred mysteries.

The Origin of Dot Painting

The dot painting technique itself, came about after the Papunya art movement began in Western Australia in the 1970’s. European art teacher,Geoffrey Bardon, encouraged the art movement, and was the instigator of a wall mural on an external wall in the school grounds.

The designs revealed maps made up of circles, spirals, lines and dashes. As public interest in the Australian Aboriginal art style grew stronger, an internal political uproar arose regarding the protection of symbolic meaning and hidden secrets to the Aboriginal people. After this, the symbols were often disguised by Aboriginal artists by using the dot painting style to ‘break up’ symbols and hide their meanings.

More information about Australian Aboriginal art can be found at http://www.australianativeart.com

Australian Aboriginal Art holds a world of mystery, deep symbolic meaning and sacred rituals. It is an intriguing part of the Aboriginal culture and it’s people. It often represents their strong connection to the land and animals. Their respect for the land and their elders is demonstrated in many original works of art. 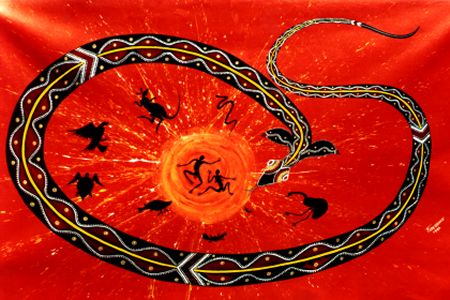